Success Is The Reward For Risk

Recognizing that success is the reward for risk is a thought that was not the original intent of a poem I wrote many years ago. The fact is, a friend of mine and I had nothing but laughs on our minds when we discussed the concept we called “vulturizing.” Following is the poem that explains.

I have to admit that my original intent for this post was to highlight the cowardice and mooching aspects of “Pigeon-heart.” After all that is why the poem was written. Maybe because I am older and because I thought of one of my readers who found value in being reminded to keep trying for success, I saw more in the poem than was the original intent. The fact is that I have quotes that speak to the underlying elements hidden in the poem.

There is an obvious reason our mooching friend is called “Pigeon-Heart.” He is unwilling to put his own efforts into the cause. He is indeed a vulture with the heart of a pigeon.

It was a shock to me when I first learned that banks only loaned after the borrower had hocked everything. I knew those who said, “If I sell everything, I don’t need the bank.” The point soon became clear that the bank wanted me to “need” success for survival. That very need was what reduced the bank’s risk, as they made sure I had some sweat in the game.

The real reason Mr. Pigeon waits for the eagle to make a kill is his need to avoid the risks associated with setting his expectation to high. By swooping in after the kill, he avoids the possibility of rejection from the girl (Apparently that is less painful than being shooed away by the strong arm of the bigger, badder, more confident eagle). Interestingly enough, the quote points out the facts borne out in the poem—the eagle foils him and success eludes him as he slinks to nearby shadows.

It is often said that successful people have many failures before they hit pay dirt. It is reported that Edison had thousands of failures before a successful light bulb. Clearly Mr. Edison suffered a great number of disappointments—or did he see it as failure or just part of the journey? Maybe he already knew that it is said, “the road to success is paved with failure.” It is also reported that Mr. Edison spoke of previous failure as providing him the knowledge of what does not work, so no need to try those again. Our pigeon-hearted vulture might try coming out of the shadows to hear a few say “NO” with the thought that he now knows where the “NO” votes are.

Finally, it is quite clear that our “vulturizing” friend spends too much time in shadows wishing instead of working. That type of idleness can’t possibly lead to success. How many times can he hear “Yes” if he never asks?

Risk taking is certainly not fun. The very concept points to weighing gain versus something to be avoided. Maybe that is why it is so often said of those who fail, “They didn’t want ‘it’ bad enough.” They didn’t want it bad enough to risk one more try, as the thought of the next pain outweighed the hope of success. What about you? Is there some work you need to substitute for a wish? Are there some wings and talons you need to grow so you can make that kill? Is there something you need to try one more time believing that success is the reward for risks taken in all those previous tries?

Check out the UlyssesSays Product Site for quotes mentioned in this post: 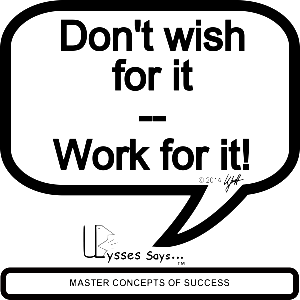 Not Wishing; rather Working!